As I research Parsifal/-zifal, I like to jot unexpected correspondences. Here is one involving the Sufi tradition. The quick quote below is included in a Sufi meditation manual that came into my possession a year and a half ago.

“The radiance of the streamers emanating from the shoulder blades has, when unfolded, often been compared by Sufi’s with a mantle of light. In the Parsifal legends, it was because there were holes in the mantle of Anfortas that the evil forces of the night were able to attack him.” Pir Vilayat Inayat Khan. The Ecstasy Beyond Knowing: A Manual of Meditation. 2014. p47

Anafortas: the wounded Fisher King who guard the Grail at Munsalvaesche.

[Perceval arrives at the Grail Castle, to be greeted by the Fisher King. From a 1330 manuscript of Perceval ou Le Conte du Graal by Chrétien de Troyes, BnF Français 12577, fol. 18v]

Below is the context in which the quote above is presented. The reader is being given meditation methods to enliven these ideas. Parsifal is not mentioned again.

The concept of energy pluming from your body can be illustrated by:

1) Energy streaming above the head, like the Pentecostal tongues of flame

3) Energy pluming out from behind the shoulder blades as winglike or cloaklike.

4) Plumes around the temples, included with the wings of the Seraphim.

5) Plumes around the shoulder blades and ankles, as the wings found in images of Hermes or Mercury. 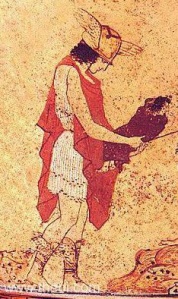 Khan proposes that attributing validity to the existence of such “higher” fields that have so far not yielded to the measurement of science, enables the accounting for some of the uncanny bouts of energy to which contemplatives refer. Examples:

“Actually, we [sic. science & mysticism] have been going along with the assumption that the body emits these fields, but what if the electromagnetic field, in fact, all components of the life field, were the templates, the mold, in which the body is being formed?” p. 47

One related meditation practice is listed among other practices given in this section.